Studies were undertaken to examine the influence of herpes simplex virus 2 (HSV-2) as a contributing factor in: (a) the increase in HIV among non-injecting drug users (NIDUs) (users of heroin and cocaine), and (b) the sexual and race/ethnic disparities in HIV infection among NIDUs (HIV was higher among women and among minorities).

How were the studies conducted and who was involved?

NIDUs entering Beth Israel drug detoxification programs and methadone maintenance programs, who reported never injecting drugs, were recruited in 1995-99 and 2005-11. Results are from structured questionnaires and blood samples tested for HIV and HSV-2.

What were some of the findings? 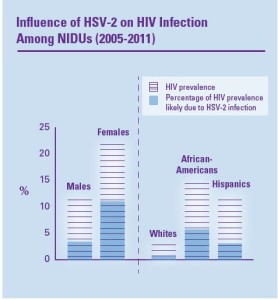 What might this mean for policy makers and funders who plan HIV prevention efforts?
Where can you find more information about these findings?

This project was supported by a grant from the National Institute on Drug Abuse [R01 DA003574].